You are here: Home / Other Services

The Importance Of Good Lighting

Good lighting is so important and we can advise on this.

The most successful of these for people with a visual impairment is a fluorescent “daylight” type tube fitted into an adjustable table top or floorstanding lamp.   This type of task lamp is best positioned quite close to the page to be viewed.  When using a magnifier and a task lamp at the same time it is essential that the light  falls directly onto the page or task and NOT onto the magnifier, otherwise it may cause disturbing reflections of the light in the magnifier lens.

Reading lamps are used from behind and positioned to shine over the shoulder and onto the task. Care must be taken to prevent glare and reflections.

Those with a central vision loss [often associated with Macular Degeneration] will need to learn an Eccentric Viewing technique in order to continue reading (even when using a magnifier). This allows the person to use a less damaged area at the back of the eye

If you find some of the letters in the beginning, middle or end of long words seem to be missing, or the letters appear to run into each other then you may find that by looking slightly to one side of the word you find where the clearest area of vision is. It is important to find which direction of gaze gives you best vision and having a good control your eye movement for this allow it to be more successful.  We can advise you regarding this.

If you been advised that your vision cannot be improved with spectacles or by medical or surgical treatment you may benefit from the use of a low vision aid. There are many types available, and too much magnification can be as bad as too little. You cannot damage your eyes by using the wrong type of magnifier but using the correct type can make such a difference. It is important that the pros and cons of each device are thoroughly explained to aid use.

We need to choose the minimum level of magnification needed when using Low Vision Aids. The magnifier will therefore be larger and the working distance longer, any slight movement of the magnifier will also be better tolerated. 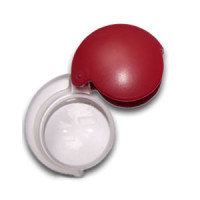 These lenses are inexpensive and light weight, they are available in powers from 1.5x to 4x. They are fine for having a quick look at something when shopping or doing housework but they tend to distort the image at the edge.  They are not recommended for prolonged work.

Single Aspheric lenses are best with the flatter side to the page, the more curved side to the eye, they tend to be heavier than Convex or Bi-Aspheric lenses. Their powers vary from 2.5x to 15x and they are extremely tolerant of changes in working distance; they will give a distortion free image from rim to rim at varying distances. This means they are ideal for those who find it difficult to get close to their magnifier. 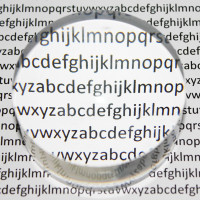 This type of magnifier sits flat on the page so there is no focusing problems. They are also very tolerant in terms of the distance used

Dome magnifiers sit directly onto the reading material.  They are always in focus and have a bright field of vision. This type of magnifier is preferred by short-sighteded people and children. They come in different diameters.

Bar magnifiers are semi-cylindrical lenses, with or without illumination, which rest on top of a page and magnify just one line of print at a time. Bar magnifiers are helpful in reading telephone directories or other reference material displayed in columns. Magnification is only 1.5x and they can be prone to reflection and distortion.

Dome and Bar Magnifiers are simple to use. Place them on to the reading material and move them along as required.

The advantage of hand magnifiers is that they will slip into most handbags or pockets and they are relatively inexpensive, people don’t usually mind using them in public and they are available in a wide range of powers (from 1.5x to 7x).

A Hand Held Magnifiers limits what you can do whilst using it and it maybe difficult to keep the print in focus if your hand shakes.  You can get a clamp that attaches the magnifier to the edge of a table to keep it still and keep both hands free.

Hand held magnifiers with a built-in light usually battery powered, make it easier to see in darker areas.  The batteries last for up to 80 hours. The light itself can last up to 10,000 hours.  They are bulkier and heavier than standard magnifiers.

How to Use Hand Held Magnifiers

You may prefer to use your distance spectacles with these magnifiers.   Start with the magnifier flat on the page and then raise the magnifier slowly away from the page until you get the clearest image. If it is a strong magnifier then you will have to hold it closer to your eye and the closer the print will be to the magnifier.  Place the reading material onto a clipboard or other firm surface to keep the print in focus. This is especially true when reading letters or newspapers.

Stand magnifiers maintain the correct focal distance because the magnifier has built-in legs that rest on the page; they are therefore always in focus.  If the user’s hand shakes, it makes little difference. Magnification ranges from 2x to 20x. It is also possible to write under the lower power stand magnifiers.

The disadvantage is that they are bulkier and not as portable as the hand held magnifiers. Stand magnifiers of higher magnification (ie 8x) need to be lit.

One style has a folding handle and folding legs and therefore can be used as either a hand or stand magnifier. The magnification range is limited no greater than 3x.

Hand held magnifiers with a built-in light usually battery powered, make it easier to see in darker areas.  The batteries last for up to 80 hours. The light itself can last up to 10,000 hours.  They are bulkier and heavier than standard magnifiers.

This type of Low Vision Aid is very popular.  Illuminated stand magnifiers, usually battery powered, make it easier to see in darker areas.  The batteries can last for up to 80 hours. The light itself can last up to 10,000 hours.  They are bulkier and heavier than standard magnifiers and it is not possible to write under them.

Stand magnifiers are used in conjunction with reading spectacles.  The reading material needs to be on a firm and flat surface.  It is essential that the magnifier is used at the correct working distance.

This type of magnifier has essentially been designed for anyone to perform fine detail (such as embroidery).  Magnification levels are limited, no greater than 7x.

Spectacle Mounted Magnifiers for Near Vision

The main advantage of this type of low vision aid is that it allows the person using it to have both hands free.  The major disadvantage is that the user has to bring the object quite close to the face in order to get it in focus

They are available in magnifications from 1x to 14x.

For those who require higher levels of magnification, the Hyperoculars (single magnifying lenses fitted into spectacle frames) are available in magnifications from 4x to 12x. Hyperoculars allow the wearer to use only one eye, the higher the magnification the closer the page will need to be held in order to get it in focus.

Spectacle Mounted Telescopes for Near Intermediate and Distance Viewing

For those people who wish to use magnification to see a variety of different distances then a telescope may help.  Telescopes of up to 6x magnification can be fitted into spectacle frames or clipped onto the users own spectacles.

Most spectacle-mounted telescopes are not designed to be used when walking around as they have a restricted field of view and objects will look much closer than they actually are.

There are some systems which allow the user to walk in them when wearing them.

When sitting down watching TV, or at the theatre, the less expensive – but less powerful – spectacle mounted telescopes can be quite useful because they are very light weight.

To find the correct working distance of a spectacle magnifier, put the magnifier on and slowly bring the print closer to your eyes until it comes into focus.  You may find it easier to keep your head still and move the print from side to side to keep it in focus.

Hand held monoculars are an effective option for those who require higher-powered telescopes (up to14x).  They are useful for spotting bus numbers, reading street signs, at sporting events – seeing score boards or even to play bowls.

It does take a lot of practice, skill and patience to use a monocular effectively; those that persevere usually find them indispensable.

Pocket Magnifiers can be very useful.  They are lightweight, easy to use and carry around and the magnification ranges from 2x to 14x.  They can come with or without illumination.  They have their limitations.  They have a narrow field of view and a short working distance.

Using a video-type camera, this type of low vision aid, allows text or objects to be magnified and viewed on a screen. The main advantage of this type of magnifier is that the distance at which you view the image is personal choice rather than being dictated by the lens.

There are two basic designs:

Desk Top Video Magnifiers - have a camera and monitor.  Magnification is adjustable, from 1x to 90x.  They are in colour with autofocus,  they incorporate a platform underneath the camera so that the user can move the reading material smoothly.
Portable Video Magnifiers - are significantly less expensive and more portable.  Some models have their own screen, variable magnification and are battery operated.  The latest models can be connected to a TV.

Tinted lenses may help in many conditions such as macular degeneration.  These conditions cause greater problems with glare and dazzle.  There are a huge range of sunglasses, wrap around and over glasses to suit all needs, in colours which are designed to help specific conditions.

Q. “Who can benefit from Low Vision Aids?”
A. Essentially anyone who can read the occasional letter on banner headlines in a newspaper has the potential for using an LVA.

Q. “Which LVA is best for which eye condition?”
A. Usually there is no one type of LVA more suited to a particular eye condition than another.   It is the working distance that is more likely to determine which low vision aid is required.

Q. “Can I buy a big powerful magnifier?”
A. No, the more powerful the lens the smaller it is and the closer the working distance..

Q. “What is the most powerful magnifier I can buy?”
A.  30X is about the limit for a low vision aid, but magnification at this level will only allow you to see three or four letters at a time and any movement of the magnifier will be very disorientating.  It is sometimes more important to consider lighting and the position of the magnifier to get the best possible result 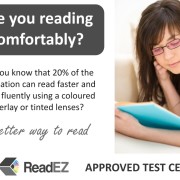